There is this wonderful Alice in Wonderland quality to the current Net Neutrality debate. Listening to the rhetoric, one s to feel that up is, in fact, down and down is up. The innovative high growth applications companies like Amazon, Ebay, and Google are are asking the government to impose a regulatory regime on the net to ensure that no application is discriminated against and the stodgier infrastructure companies like Verizon and TIme Warner Cable are asking the government to stay out of way and let the free market decide how access to their pipes is priced.

This mind bending transposition only sorts itself out if you bring the prospect of a broadband wireless local loop into the discussion. In the debate about Philadelphia or San Francisico’s wireless proposals, both sides resort to their true colors. The infrastructure companies complain to their friends in the local regulatory bodies that they need to be protected from the competitive pressure of cheap access and the applications layer companies are enthusiastic supporters of a new competitor providing an alternative local loop. This makes it clear that Net Neutrality debate is really about whether the local loop is a natural monopoly, if it will always be so, and, if it is a natural monopoly, whether it should be regulated to ensure the public good.

By framing the issue this way I do not mean to over simplify it. We spent an entire morning discussing Net Neutrality at our last Sessions event. If you have an interest in the area, I would encourage you to dig through the transcript but in the meantime I will try to highlight some of the key insights that came out of the discussion.

Jon Taplin argued that the local loop will be a duopoly controlled by the cable operators and the telcos. He beleives that a two way six megabit is the minimal level of service we will accept and that wireles will not deliver that.

Chris Putala of Earthlink made the point that the threat of wireless access is one way to get carraige on the Telco and Cable companies pipes. 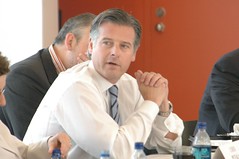 We may be able to create some leverage which through — we’re playing a lot in the WiFi space building clouds over cities, and I think there’s probably more of a complimentary aspect, because I don’t necessarily see us getting to six megs symmetrical. The initial roll out we’ll be doing will be one meg symmetrical. It’s important. It brings a lot of applications, but I really think that much of that is about negotiating leverage to get on to, you know, one or both of the pipes into the house. 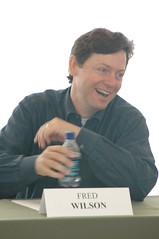 Laurie Racine pointed out that even if Fred is right that we can innovate around the duopoly of the cable companies and telcos, it does not mean that consumers are being well served. 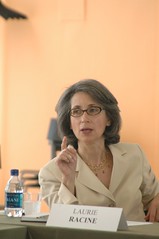 I think we’re talking about defensive innovation as opposed to really creative innovation. And what’s happening outside this country, without the pressures on innovators and VCs because of the structures that say are in Korea or other places, allows for innovation to take place without parameters. In other words, without edges that are essentially closed. And in this country, what we’re seeing now actually is an innovative structure that is reactive, and there’s a big difference.

Laurie was talking here about innovation as the applications layer service providers think about it. It is another aspect of the through the looking glass character of this debate that the pipe companies are claiming to be the champions of innovation. They argue that imposing a regulatory regime that eliminates their ability to price differently for different services would make it impossible for them to “innovate” at the infrastructure layer but here they blur the distinction between innovation and infrastructure deployment. Most of the tecnhologies they are deploying were invented years ago, as is evident from the fact that in other parts of the world like Korea, Japan, and many parts of Europe, they all ready have more than six megabit speeds in their local loops.

There is an open question on whether the cable and telephone companies can charge enough for open bandwidth access that they can fund a “traditional” broad band build out. Even if they could deploy fiber in wealthy urban neighbor hoods, it is unclear that that they would be able to do it in poor rural ones. But these are deployment issues not innovation issues. The pipe providers could theoretically invest in developing innovative ways to provide inexpensive wireless broadband services to both urban and rural communities but they have huge sunk costs in their current wired networks that could be obsoleted by successful wireless implementations so no one expects them to agressively invest in those technologies.

In the end, the entrepreneurs, venture capitalists, policy people and academics that attended our Sessions event all agreed that allowing the telcos and the cable companies to exploit their current natural monopolies in the local loop to extract a tax from applications layer service providers and/or to control the users experience of those services by speeding up or slowing down specific services would hurt innovation and would not be in the best interest of consumers. We could not agree on the degree of risk or on a specific solution to the problem.

It is a measure of the profound impact the internet is having on our society that the Net Neutrality ammendment to the telecommunications bill has fractured the traditional voting blocks in Congress. We are living through a period of transition as fundamental as the shift from an agrarian to an industrial society. We should not be surprised that we sometimes feel that we are gazing through the looking glass. We should also not be surprised that there are no easy answers and that the ideas with the most promise are not easily classified. The solutions we arrive at are likely to involve some aspects of traditional regulation, some market mechanisms, and some technical and business model innovation. All of us are going to have to step away from the easy orthodoxies that allowed us to navigate the relatively stable waters of the industrial economy and consider solutions to this brand new set of problems in a new light. It is not going to be easy, but there is a lot at stake, and it is worth doing.

When did America become too afraid to explore a frontier?