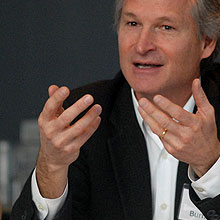 @BradUSV
Brad Burnham is a partner at Union Square Ventures. He started working in information technology with AT&T in 1979. Brad spun Echo Logic out of Bell Laboratories in 1989 and joined AT&T Ventures in 1993. Brad co-founded TACODA in 2001 before joining Fred to create Union Square Ventures in 2003. Brad majored in political science at Wesleyan University. He is married with two kids and lives in New York City.

History doesn’t repeat itself, but it does rhyme