A common narrative in the Web 3.0 community is that we are in an infrastructure phase and the right thing to be working on right now is building out that infrastructure: better base chains, better interchain interoperability, better clients, wallets and browsers. The rationale is: first we need tools that make it easy to build and use apps that run on blockchains, and once we have those tools, then we can get started building those apps.

But when we talk to founders who are building infrastructure, we keep hearing that the biggest challenge for them is to get developers to build apps on top. Now if we are really in an infrastructure phase, why would that be?

A big part of why this is even a topic of conversation is that everyone now knows that “platforms” are often the largest value opportunities (true for Facebook, Amazon/AWS, Twilio, etc.) — so there is naturally a rush to build a major platform that captures value.  This may be even more true in the distributed web where value often — but not always — accrues in the protocol layer rather than the applications that sit on top.

Another example: Planes (the app) were invented before there were airports (the infrastructure). You don’t need airports to have planes. But to have the broad consumer adoption of planes, you do need airports, so the breakout app that is an airplane came first in 1903, and inspired a phase where people built airlines in 1919, airports in 1928 and air traffic control in 1930 only after there were planes. 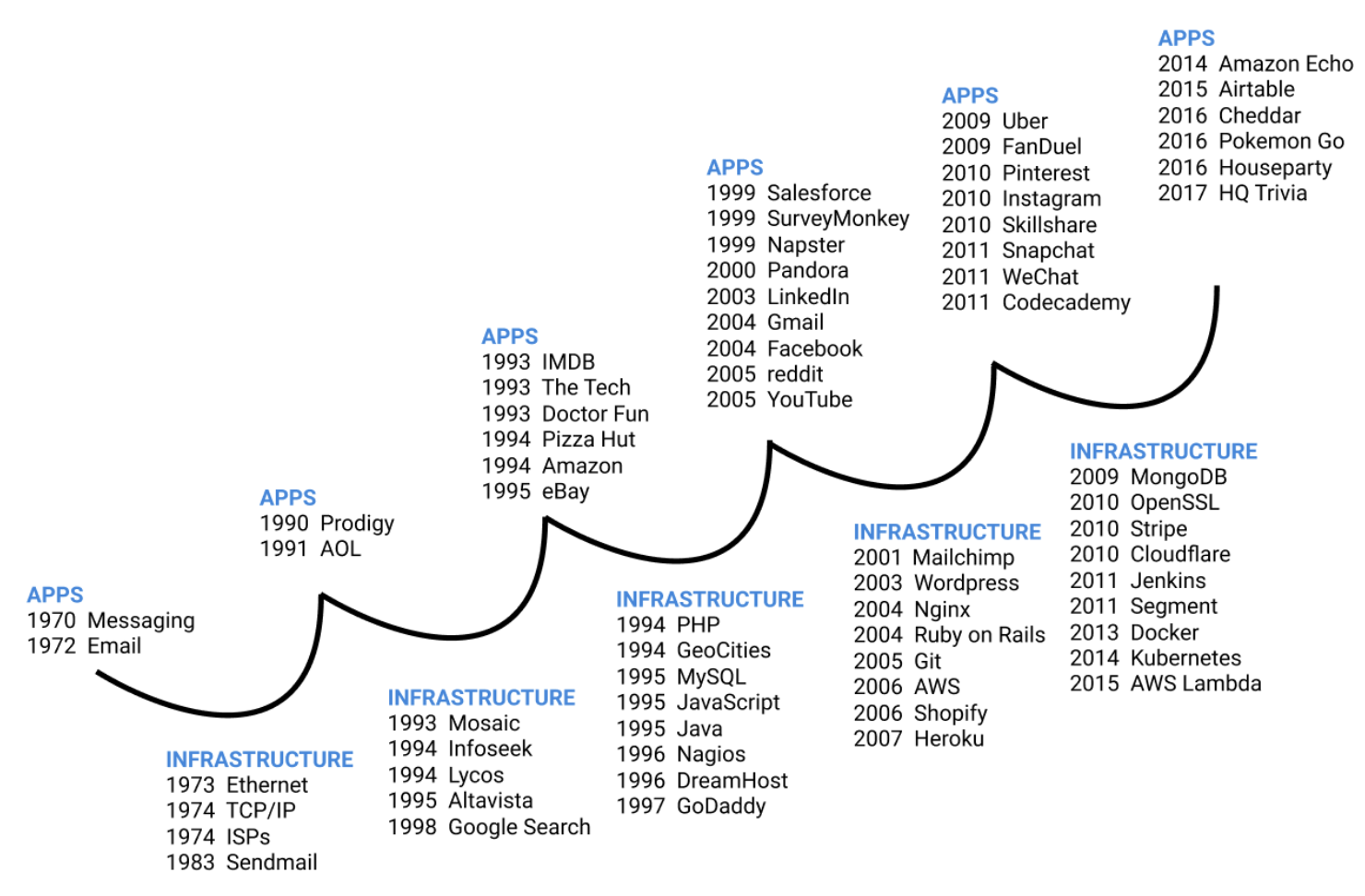 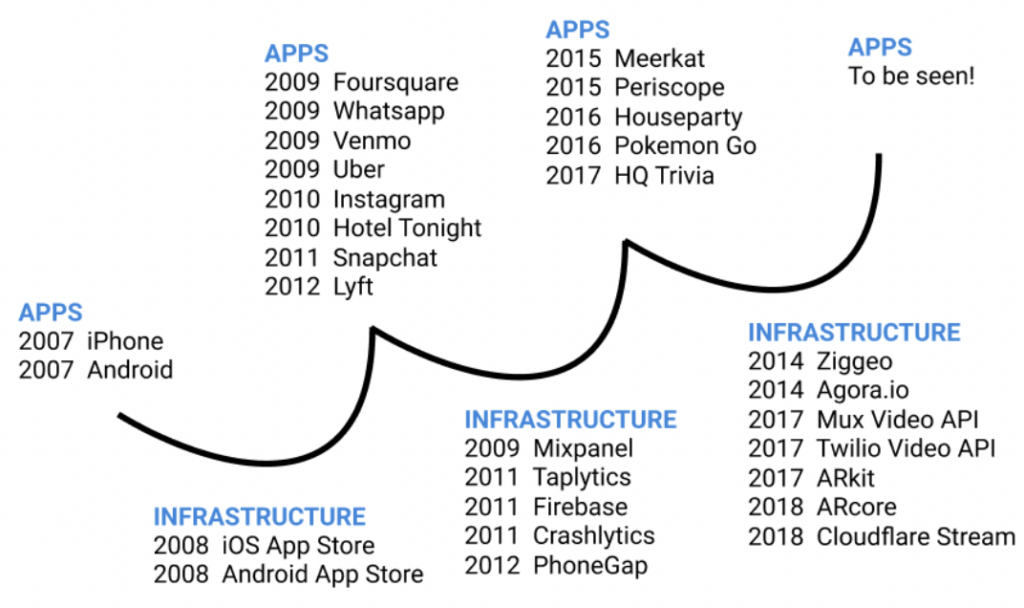 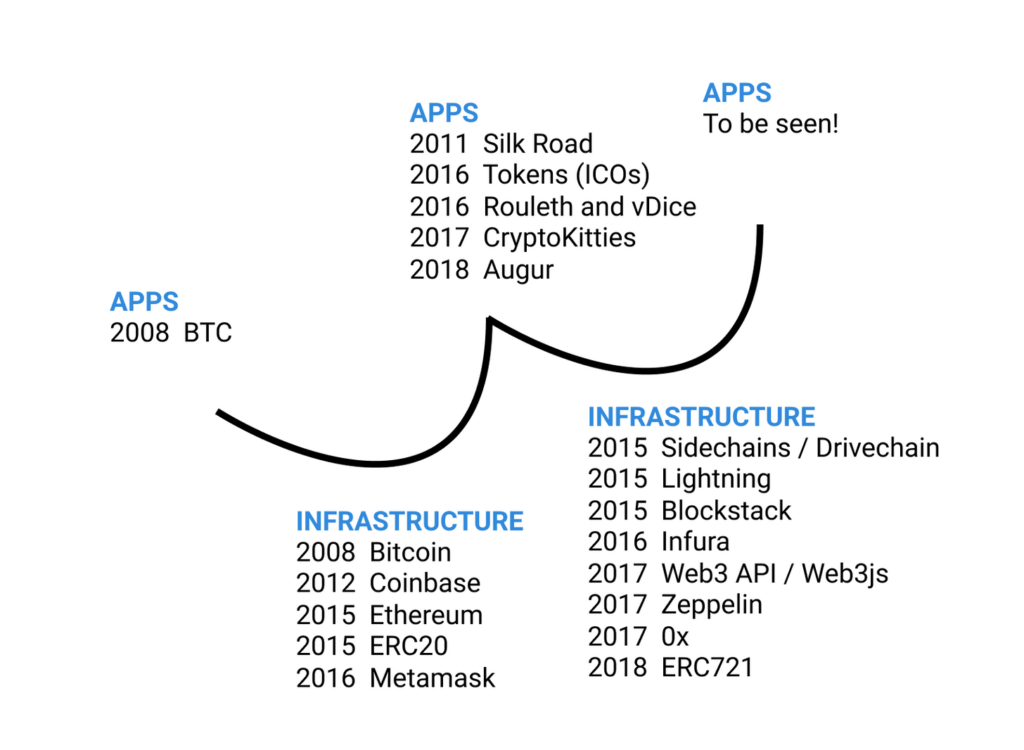 The common theme in the development of each major platform (electricity, cars, planes, the web, mobile, etc.) is that we build what we can given the tools available to us at the moment.  In Where Do Good Ideas Come From, Steven Johnson refers to this as The Adjacent Possible.  In other words, you can open the door to the next room, but you can’t really skip steps and open the back door from the front porch.  It is hard to successfully build infrastructure that is too far ahead of the apps market.

Each time the apps => infrastructure cycle repeats, new apps are made possible because of the infrastructure that was built in the cycles before. For example, YouTube could be built in 2005 but not in 1995 because YouTube only makes sense after the deployment of infrastructure like broadband in the early 2000’s, which happened in the infrastructure phase following the first hit dot com sites like eBay, Amazon, AskJeeves and my favorite, Neopets.

Chris Dixon and Fred Wilson talk about this concept in a recent episode of the a16z podcast. Chris has a board game from the dot com era called Dot Bomb that makes fun of the silly dot coms of the late 1990’s. And what he points out is that all the ‘silly’ ideas of the dot com era are now the billion dollar unicorns. What is now possible several app => infrastructure cycles into the internet made no sense just one or two apps => infrastructure cycles in.

As there are more and more cycles in each new platform it gets cheaper to build and use those apps. Building usv.com in 1995 would have cost us many orders of magnitude more than it would cost to build today, and creating Web 3.0 apps costs more in cash, effort and time today than it will 15 years from now.

Take light bulbs for example. Yes, they were invented before the grid, but looking at it from an investor perspective, no one sold a lot of lightbulbs until the grid was in place.

One question we had is: why is it that apps come first in the cycle, and not infrastructure first? One reason is that it doesn’t make sense to create infrastructure until there are apps asking you to solve their infrastructure problems. How do you know that the infrastructure you are building solves a real problem until you have app teams that you are solving for? It will be a challenge to build crypto infrastructure now until there is a breakout crypto app that other developers want to emulate and need better dev tools and infrastructure to do so.

There is a narrative in the crypto space that first we need to build great tools, and once we have the tools, then we can build apps. But what we hope to have shown is that in other platform shifts, we are able to build the first few apps before there are great tools (though it is more cash and time intensive), and then those early apps inspire us to build tools.  And the cycle repeats.

Update (10/5/18):  This post has gotten a lot of attention, has generated some great discussion, and has produced some useful feedback.

First: duly noted that we spent most of our time here looking backwards at historical precedent, and thus that our diagram on the decentralized web / web3 / crypto was a) admittedly thin, and b) really just focused on the ETH ecosystem.  We have updated that diagram to be a little more clear, and to include important concepts from the BTC ecosystem.  Thanks to Dennis Porteaux for the excellent analysis on this.

Second: our favorite piece of feedback is that crytpo networks, in fact, really blur the line between apps an infrastructure, due their open and interopable nature. That is one of our favorite aspects of them.  So, for instance, an “app” (like CryptoKitties, or any smart contract, or Bitcoin itself) can be infrastructure if someone builds on it.  Of course, there are components of these networks that are **only** infrastructure (Lightning, Zeppelin, etc), but the line is blurred.  Whereas in the past a platform (like Amazon or Facebook) had to make a conscious decision to open up APIs and become a platform, crypto apps are generally open and interoperable from day 1.  This only makes the apps=>infrastructure=>apps=>infrastructure cycle tighter.  Thanks to Denis Nazarov and Jutta Steiner for really articulating this.